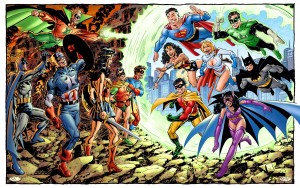 Comic book movies and TV shows have begun to take a lot for granted. The latest Batman v Superman epic yarn assumed you knew the power set of a character that was on screen for 15 seconds at the tail end of a dream sequence where Bruce Wayne might have been awake or asleep. But he was definitely asleep probably. Also Wonder Woman has exploding bracers and might be able to fly. Also Doomsday has a giant exploding disco ball that plays weird dance music. If you don’t know the characters you are lost.

Several new comic book TV shows started out assuming that the audience knew nothing about the character. The Flash took full advantage of that by making the first season almost exclusively about The Flash learning about his powers and how fast he could run. This let audience members who were new to the character sit back and enjoy the ride while more well-read viewers could enjoy watching the evolution of a character they already knew and loved. Arrow was very similar. I knew all about the character but my wife new nothing. We both enjoyed Arrow (and still do).

In season 1 The Flash would occasionally have small Easter Eggs for the nerd crowd but even they were often fleshed out and paid off later down the road. Then season 2 came and created multiple Earths and shit started getting weird. D.C. weird, not Marvel weird. Let me define these: 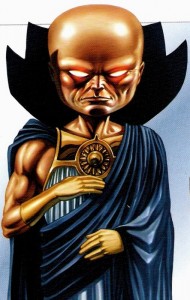 The Watcher in a Toga on the Moon

Marvel Weird: There is a giant bald guy in a toga that lives on the moon and chronicles all of the exploits of Earth’s greatest heroes. He is called The Watcher and he watches everything. Occasionally he looks into other dimensions to see how things turned out given a different set of variables. He is immortal and controls the power cosmic making him one of the most powerful beings in creation but never does anything.

D.C Weird: Brother Power the Geek was originally created when a couple of hippies dressed up an abandoned mannequin that was struck by lightning and brought to life. While Brother Power’s adventures originally only lasted two issues, they included being kidnapped by a circus, becoming a model factory worker at J.P Acme Corporation, and being shot into space by then Governor of California Ronald Reagan.

As you can see both are weird but D.C. has that extra bit of nonsense that seems like the stream of consciousness writings of a drunk.

With both types of weird in mind it is easy to see that the more these shows assume the viewers already know about the characters, the harder it gets on me.

Recently I have been having a very similar conversation with my friends and family about comic book movies and TV shows. Plug in any character, power set or show. It is a variation of:

Me: “That was The Flash from the future coming back to warn someone of a terrible event that will happen.”

Them: “How did you know that?”

Me: “Because The Flash has time travel powers associated with the Speed Force, he’s just not very accurate at this point so he isn’t always sure exactly when he will arrive. Also due to the events of Flashpoint: Paradox we know that if Barry Allen goes back too far and disrupts a key event like the death of his mother then continuity would be disrupted on such a large scale that he would create more problems than he would solve.”

Them: “So who was the other guy running real fast?”

Me: “That was The Flash from Earth 2. He crossed over into this reality from his own version of Earth. Also Wally West became The Flash in 1959 after Barry Allen died but he has been retconned for some reason. There is also another Flash from another Earth but he was killed by Gorilla Grodd.”

Them: “Who is Gorilla Grodd?”

Me: “You don’t need to know who Gorilla Grodd is.”

My point is if you are going to write a script about a superhero and can’t find a way to put it together that explains to the audience who the hero is pick another story.

Imagine if you were watching Die Hard, but the scene that takes place on the plane from the beginning of the movie where John McClane talks about going to see his wife was edited out. The story opens inside Nakatomi Plaza, without an establishing shot, and Hans Gruber starts shooting people and screaming wildly in German. He shoots the coked out bearded guy and starts rounding up everyone. Gruber looks at his friend and says, “Since we aren’t really terrorists we should start stealing everything”. At this point John McClane explodes through a wall yelling, “Yippee Ki Yay Motherfuckers!” and shoots all of the criminals with lasers from his eyes.

It’s interesting but I don’t know what’s going on, who the story is about or why I should care. Comic book characters are at least as complicated as an action hero and probably more so. If I don’t know who they are I can’t care about them and I won’t care what happens.

TIP: Use the script as a tool to develop the main characters of your story. It can also be exciting for the audience to see the main character change as the story unfolds as a reaction to the events that occur.

Here is more on why explaining why comic book shows can get frustrating: