Originally published at The Onion August 30, 2000

HONOLULU–In an announcement with grave implications for the primacy of the species of man, marine biologists at the Hawaii Oceanographic Institute reported Monday that dolphins, or family Delphinidae, have evolved opposable thumbs on their pectoral fins. 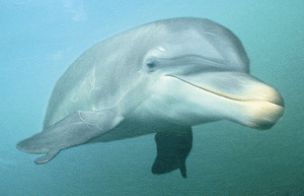 One of the evolved dolphins, whose opposable thumbs have struck fear in the hearts of humankind.

“I believe I speak for the entire human race when I say, ‘Holy fuck,'” said Oceanographic Institute director Dr. James Aoki, noting that the dolphin has a cranial capacity 40 percent greater than that of humans. “That’s it for us monkeys.”

Aoki strongly urged humans, especially those living near the sea, to learn to communicate using a system of clicks and whistles in a frequency range of 4 to 150 kHz. He also encouraged humans to “start practicing their echolocation as soon as possible.”

Delphinologists have reported more than 7,000 cases of spontaneous opposable-digit manifestation in the past two weeks alone, with “thumbs” observed on the bottle-nosed dolphin, the Atlantic humpback dolphin, and even the rare Ganges River dolphin.

“It appears to be species-wide,” said dolphin specialist Clifford Brees of the Kewalo Basin Marine Mammal Laboratory, speaking from the shark cage he welded shut around himself late Monday. “And it may be even worse: We haven’t exactly been eager to check for thumbs on other marine mammals belonging to the order of cetaceans, such as the killer whale. Oh, Christ, we’re really in the soup now.”