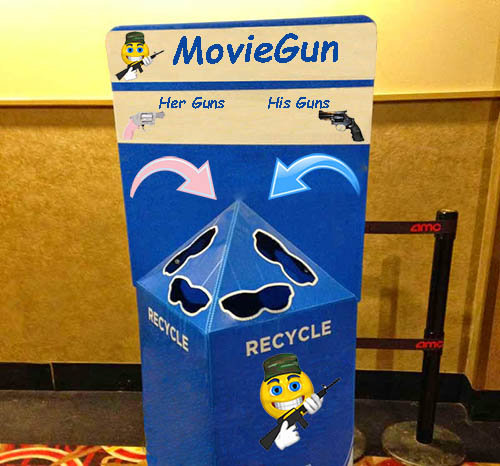 DALLAS – Today The National Rifle Association announced a new program that is designed to prevent future mass shootings in movie theaters across the United States. Along with their partners Cinemark USA and Arms Technology Inc. the NRA is preparing to roll out MovieGun, a program that distributes a handgun to all patrons that purchase a movie ticket.

“I’m surprised we didn’t think of this sooner. We only needed to increase movie ticket prices by $1.50 and that’s less than the 3D glasses!”, said Wayne LaPierre the current CEO and Executive Vice President of the NRA. “This is the perfect answer to the problem of too few guns in theaters. The next time a lunatic surprises a full and darkened room of unaware movie watchers and starts shooting wildly you can bet he’s is going to get a big surprise. Clearly everyone will be much safer with MovieGun.”

When asked about the legalities of distributing firearms to anyone at a theater LaPierre said, “Mandatory licensing, background checks, and the registration of firearms are what got us here is the first place. Keeping guns out of the hands of honest citizens of the United States emboldens these killers to attack theaters and other establishments. We need a third amendment to the U.S Constitution that would guarantee businesses the right to rent guns to all of their patrons.” When reminded there was already a third constitutional amendment that prevented the quartering of soldiers in private homes he added, “That is of course also important, so we make it the fourth amendment. Just get it in there.”

LaPierre concluded his announcement with, “Terrorists, home invaders, drug cartels, car jackers, ‘knock-out’ gamers, rapers, haters, campus killers, airport killers, shopping mall killers and killers who scheme to destroy our country with massive storms of violence will now find movie theaters off limits! The target will just be too dangerous. For them!”

Cinemark CEO Timothy Warner is also very excited. “We were concerned that our valued customers would take issue with paying an addition $1.50 per ticket but we have received very few complaints. Given that we turn some profit on the sale of 3D glasses this is another add-on that our patrons can enjoy. Theater shootings have impacted our sales over the last few years and this new program will certainly help the bottom line, plus we can re-purpose the 3d glasses turn-in containers and avoid additional costs. And make things safer.”

Carole Murray, Republican state representative in the Colorado legislature is also a firm supporter of MovieGun. “Most of the mass killings that we talk about have been effected in gun-free zones. So when you have a gun-free zone, it’s like saying, ‘Come and get me.’ The NRA has all but solved the gun-free issue in our movie theaters. Thanks MovieGun.”

The Washington Post published an article on July 4, 2015 claiming that there have been 204 mass shootings this year. At that time this would have meant there was a mass shooting for every day of the year. The article cites several studies that includes one from Mother Jones that’s states, “Among the 62 mass shootings over the last 30 years that we studied, not a single case includes evidence that the killer chose to target a place because it banned guns.” If this is true then an increased number of guns may have an unexpected result that the NRA, Cinemark and others involved in MovieGun have not predicted. A sudden and explosive increase of freedom in America.